ENJOY THE RIDE…AND THE DESTINATION. 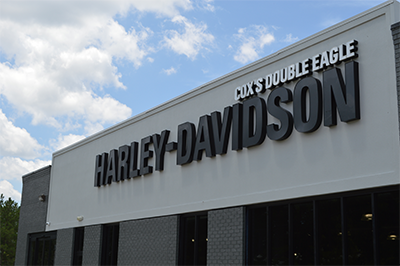 Cox's Double Eagle Harley-Davidson of Pinehurst stands for family connections, friendships, and freedom. From the moment you walk through our doors you're part of a North Carolina family motorcycle tradition. Since 1961 and for three generations, the Cox family has delivered a world class motorcycling experience.

In 1961, a little garage down a rural road in Randolph County ignited the spark of Cox's Double Eagle Harley-Davidson. By day Recil Cox worked hard at a local battery manufacturing plant. By night he worked diligently in his garage. Working on machines came naturally to Recil. As a young man he was tasked with maintaining the family farming equipment running. Self-taught, Recil was born in 1926 and earned a sixth grade education until he had to quit school to work on the family farm in Coleridge with his many brothers and sisters. When the industrial boom hit the Southeast, Recil left the farm and found work as a mechanic in the hosiery mill in Asheboro. While at the mill, motorcycles became his passion, and soon enough friends had him working on their motorcycles. In the late 50s, when the Harley-Davidson dealership in Asheboro closed, everyone started coming to Recil for motorcycle repair. As the jobs came in, Recil built a house with a basement to expand his work area. When Harley-Davidson approached him about becoming a dealer, Recil answered, “I don’t know anything about business. The only thing I am is a mechanic who loves to ride.” In June 1961, Recil built a two car garage behind his house and became the Harley dealer. Recil figured, “If the Harley business fails or if I fail, then I at least have a two–car garage.” For the next year, Recil worked the seven-to-three shift at the factory and from four in the afternoon on he served the community as a Harley dealer. Around 1970, Recil added onto the Harley-Davidson shop in Asheboro. Recil worked in the dealership until he was 88 years old.

Change was truly the only constant for this family business. From the first shop down the rural road to the store front, Recil’s son Gary Cox, nicknamed Poochie, continued the second generation of service. An inspiration to all, Poochie was the type of man who knew no stranger. All too soon, Poochie passed away at 56 from colon cancer. He remains a great influence for his son Robbie, the owner of Cox's Double Eagle H-D. Robbie looks back on his father saying, “My dad’s love for not only the product and the industry but also for the people inspires me! He enjoyed the entire experience from giving to charitable organizations to seeing the excitement of a customer purchasing a Harley. Loving the family of riders, Poochie considered everyone who worked for him to be family, and he showed it in major ways. With his great personality, he really connected with people.”

Today, Robbie Cox, the keeps the family legacy alive. In building the brand, Cox defies all stereotypes. Robbie states, “When first meeting, most people expect to meet an older gentleman with a beard, a gut, and tattoos. I’m not that guy; I am an athlete; I love my motorcycles. Just like the bank executive, doctor, or lawyer who’s a Harley-Davidson rider, I can be Harley the way I want to be Harley. Last night after work, I played nine holes of golf. Removing stigmas is where Harley wants to be and where Harley needs to be.” You can literally get out of Harley what you want out of it. Clark affirms, “Harley transcends all ages; there are no boundaries.

Indeed there are no barriers with this brand! Robbie details further, "Whether you are the guy who just got off the backhoe working for the road crew, or you’re a surgeon, car salesman, or the young kid who just came back from Afghanistan—it doesn’t matter your color, background, or career. It doesn’t matter whether you’ve got a million bucks or you’re eating Ramen noodles, Harley Davidson is a brand that brings everyone together.” The universal love of the Harley has driven the brand to become the number one motorcycle in the world, period.

Whether you’re seeking a new destination or your ride is the destination, Cox’s Double Eagle Harley-Davidson.